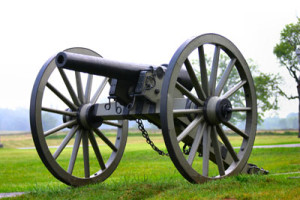 In December 1862, General Lee wrote to the Confederate Secretary of War that his army desperately needed more Napoleon guns to counter those in use by the North. The lack of Napoleons, Lee wrote, left his artillery “very unequal” to their opponents, with results which were “discouraging to our artillerists”. Lee proposed that large numbers of his army’s bronze cannon be melted down and recast into Napoleons. He summarized his position by stating that “the best guns for field service, in my opinion, are the 12-pounder Napoleons”.

The cannon was called the Napoleon because its design was first adopted by Emperor Louis Napoleon of France in the 1850’s. In the U.S., the gun was formally designated as “Light 12-Pounder Gun, Model 1857”. There were only a few dozen in existence in the U.S. when the War began 1861, but by the battle of Gettysburg in 1863, they had become the most popular smoothbore cannon for both sides. Before the War ended, more than 1100 had been produced in the North and more than 600 in the South. By late 1864, Lee’s army of Northern Virginia was using more Napoleons than all other varieties combined.

The gun was so widely used because it was as effective as its predecessors, but much lighter and more mobile.  It was also popular because it did its job so well. Solid shot, explosive shell, spherical case shot(containing many small balls) and canister could all be fired with deadly effect. Effective range was about 1000 yards, and maximum range was nearly a mile.

Southern gunners were particularly partial to the use of Napoleons. On both sides, no other Civil War artillery was more widely or effectively used.